Bob’s might be my favorite place to eat in Oregon, my home state. This is a big compliment given the gazillion vegan or vegan-friendly restaurants and food carts in Portland. For the uninitiated, Bob’s Red Mill is a brand of flours and other baking supplies that has a home base of Milwaukie. Just like on the packaging (and in the name of course), Bob’s is an adorable red mill that houses a restaurant and bakery, as well as a store for all your baking needs. Also, Bob is a real guy, and if your timing is right, you may see him eating his morning grits in the dining area or playing a tune on the piano.

What I order: Vegan & gluten-free pancakes or the tofu scramble (both of which can be found on their vegan menu)

Monty’s is a diner that I could have listed under the “expansive menu” category below, but they’re best known for their breakfast. Grab a vegan menu and behold your options: hash with tempeh, almond milk french toast, or a country breakfast, just to name a few. Monty’s catered our wedding and I got a ton of rave reviews from guests who didn’t realize they would like vegan food. Mission accomplished!

What I didn’t mention: They also have vegan shakes.

The Flying Biscuit has a bunch of locations around Atlanta and has now expanded to Florida, North Carolina, and Texas. This was one of my favorite places to eat in Atlanta and it was an ideal place to bring family members or friends with varying dietary needs. While I’d love it if they offered a couple more vegan options, I’m pretty happy with a tofu scramble with veggies and fresh fruit, or a couple sides. Their apple butter is also amazing and they sell jars of it on-site. Or if you just can’t wait, here’s the recipe: http://www.pba.org/flying-biscuit/

Which location I recommend: Mid-town if you don’t mind searching for a parking spot. It’s a great neighborhood and the big windows make for the perfect brunch ambiance.

Seward Cafe is the lovable cousin of the Seward Co-op located nearby. They serve their delicious, large-portioned breakfast all day and there are a plethora of vegan options on their 3-page breakfast menu. Highlights include the faux egg mocmuffin, fluffy pancakes, biscuits & gravy, and any of their “earth bowls” made vegan.

What to know: Order at the counter, then find a table and wait for your order number to be called.

This little bakery and breakfast joint is owned and operated by Doron Petersan, cookbook author and two-time winner of Cupcake Wars. With those credentials, it’s not surprising that this place is a favorite among vegans and carnivores alike. Though I’ve most thoroughly enjoyed the pancakes, they also offer other breakfast options, lunch items, shakes, and of course desserts. Wheat-free items are clearly labeled.

Find out what their charity of the month is here: http://www.stickyfingersbakery.com/

This is THE place for vegan, gluten-free savory scones and sweet-but-not-too-sweet tea biscuits. On the rare occasions I make it to Seattle, I eat something there and take multiple items to go. Their cookbook is excellent too, though many of the recipes are more involved than my laziness will allow. 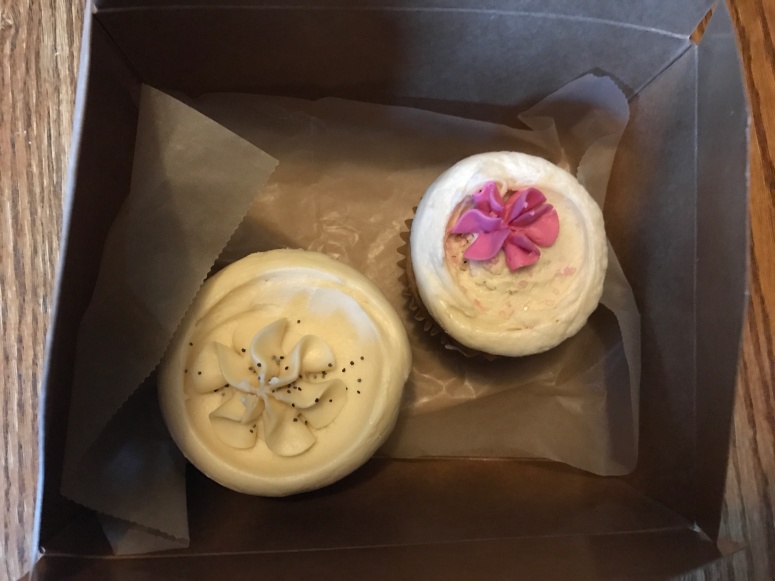 When Bloom Bakeshop moved in nearby, I told my husband that we can never move. About half of their baked goods are vegan and gluten-free, and everything is labeled nicely for patrons with allergies. I’m partial to their whoopie pies (two chocolate chip cookies with frosting in the middle) or one of their many donut flavors for a sugary breakfast. They also have a mean vegan biscuit sandwich featuring sweet potatoes and a curry aioli.

Also, the place is adorable and has both a vintage-y and natural feel. It’s a great place to read a book or do some blogging; just don’t plan on this on a weekend morning because that’s when they seem to be most busy.

My favorite of their donuts: cinnamon sugar

Babycakes also makes some decadent vegan, gluten-free donuts and other treats. The owner, Erin McKenna, has also released three cookbooks (“Babycakes Covers the Classics” being my personal favorite). I’ve only been to the adorable NYC location, though if I find myself in Orlando I’d be pretty excited to check out the one inside the Disney World theme park.

The Cheeze Factory is an impressive, entirely vegan restaurant with a location that may surprise you: the small tourist town of the Wisconsin Dells. It apparently used to be a traditional Wisconsin Cheese company and they chose to give a little nod to the building’s history by keeping “Cheeze” in the name. They have vegan takes on your traditional diner fare, with dishes like “Frank’s Weiner” and a mock tuna salad sandwich. For those with a more refined palate, they have a Caponata Napolitana and a great curry dish. Many of their menu items can also be made gluten free.

What to have for dessert: a piece of Chocolate Espresso Cashew Dream Cheezecake (but split it with someone because it’s ridiculously rich)

This is one of my favorite cafes and my non-vegan husband agrees! I most often go for the Sesame Kale Macro Bowl or the Soul Bowl with its delicious barbecue sauce, while my husband usually opts for the faux meatball sub. I particularly love their Tigard, Oregon location because people often wander in, happily eat the food, and then realize that it’s vegan.

The best time to go: On a “Native Pals” day. On these designated days, when you buy an entree, side, and beverage they give you a free dessert and a portion of their sales go to community farm sanctuaries.

This all-vegetarian and vegan-friendly restaurant has been “meat free since ’83.” They now have two locations in Chicago, both in fantastic neighborhoods (one in Logan Square and one on Halsted). It seems that they’re always busy so plan on a wait (about 45-60 minutes on a weekend night), or get in a bit quicker if you offer to sit at the counter. Regardless, it will be worth your wait! Vegan options are labeled and include items like seitan chili wings, vegan poutine, truffle mushroom lentil loaf, avocado tostadas, and other deliciousness. Their award-winning vegan milkshakes are also a must-try.

For those in Chicago: They’ll now deliver that truffle mushroom lentil loaf straight to your doorstep.

Though I tend to keep my meals low-cost while on a trip, Millennium is a place for a vegan to splurge. To go all out, make it a three course meal by ordering a starter, main, and a dessert (e.g., pistachio stuffed dates, juniper smoked maple glazed tempeh, chocolate cherry cheesecake). The menu changes frequently to reflect the local, in-season ingredients and the wine list is internationally recognized.

I’ve only been to Candle 79 once but it was one of my favorite vegan meals of all time, and it’s so fun to occasionally go somewhere that’s both vegan and higher-end. I skipped the three course meal option since appetizers run in the neighborhood of $20, even though I’m sure they’re amazing. At the same time, their organic, farm to table entrees are with the $20-25 price point. They’re currently offering a raw option of live zucchini enchiladas, a vegetable tempeh empanada, and a Moroccan chickpea cake, among other contenders. Finish the meal by splitting one of their many dessert options.

Veggie Heaven has long been an institution on Guadalupe, near the University of Texas campus. This all-vegetarian Chinese restaurant closed a few years ago, causing much dismay among Austinites; I was thrilled to learn that they’ve recently re-opened their doors. One of their most popular dishes is the Lucky 7, which contains 7 fried tofu balls and veggies.

Ok, I’m going to say something that may warrant an eye roll: There’s nothing like a bowl of brown rice, kale, and tempeh. Rosetta’s also takes it to the next level with delicious sauces, such as their tahini Korean barbecue sauce. The offer a handful of different bowls to this effect, but they also have an array of other lunch options, from sandwiches to tacos. It’s also a great spot to enjoy coffee and a baked good for a relaxing morning.

Kansas City, Missouri is a surprising vegan mecca, with FuD being my low-key favorite. They’re known for their delicious raw options (mmm, rainbow taco wrap…), though they also have plenty of items that are cooked/hot. Grab a seat by the window and take in the cozy and colorful decor. They also offer parfaits and cashew ice cream for dessert, or you can head to Eden’s Alley (also in Kansas City) for raw cheesecake.

Next Level Burger has three Portland area locations and counting. They boast more than 10 vegan burgers, gluten-free buns, shakes (made with soy or coconut soft serve), fries & tots, and other yummy diner fare. Though I haven’t gotten to try their breakfast yet, options like the kale florentine benny and tempeh bacon sound just as appetizing. Their Lake Oswego location is within a 365 grocery store; have a meal and then do a little shopping.

What would a list of vegan eateries be without a food cart? BBQ Revolution challenges the notion that good barbecue must be meat-based. Their smoked soy curls melt in your mouth and there’s no better pairing than their vegan potato salad. Head to their location on Webberville Road on a nice day and eat at one of their picnic tables.

On a recent visit to the bay area, my sister and I were strolling into what we thought was Herbivore until we realized that now it’s some crappy fusion restaurant!!! Ok ok, I’m sure the new restaurant is fine, but it’s not Herbivore anymore, which was incredibly sad. I post this in hopes that the owner will randomly see it and decide to open again. My local sister and brother-in-law would thank you!

I’m always up for trying new vegan-friendly restaurants! Tell me what your favorite is below. Like this post? Do me a favor and pin this image:

2 thoughts on “SuitcaseEnvy’s Favorite Vegan-Friendly Eateries in the U.S.”