Lake Geneva, Wisconsin is a sweet little resort town about an hour and 15 minutes from Madison and an hour and 45 minutes from Chicago. Despite its closeness to us, my husband and I had never been there until I learned about Winterfest and decided we needed to go for a low-key babymoon. What did we learn? This city is family-friendly, outdoorsy, and offers activities and festivals in every season. Read on to hear all about our Winterfest trip.

The Cove of Lake Geneva

The largest decision for this trip was where to stay, particularly since accommodations in a resort town during its largest annual festival are not cheap. We opted for The Cove of Lake Geneva, a mid-level hotel with a great location across the street from Flat Iron Park (where much of Winterfest is held) and just a couple minute walk to the historic downtown. The Cove turned out to be a great choice, not just because of the location but also because of the jacuzzi tub in the room, an indoor pool, an arcade that I’m definitely not too old for, and its attached restaurant Sprecher’s (of the Sprecher’s root beer and soda fame).

First and foremost, the crown jewel of Winterfest is the U.S. National Snow Sculpting Championship, located at Flat Iron Park and Riviera Beach. Teams of three sculptors, who have already won smaller competitions in their respective locations, battle it out for three days to see who can create the most impressive piece of art made out of snow. This year, the 15 teams also had to contend with record low temperatures and windchills, followed by a significant shift in the weather that led to some melting. In spite of these challenges, the results were so impressive. Here were just a handful of my favorites: 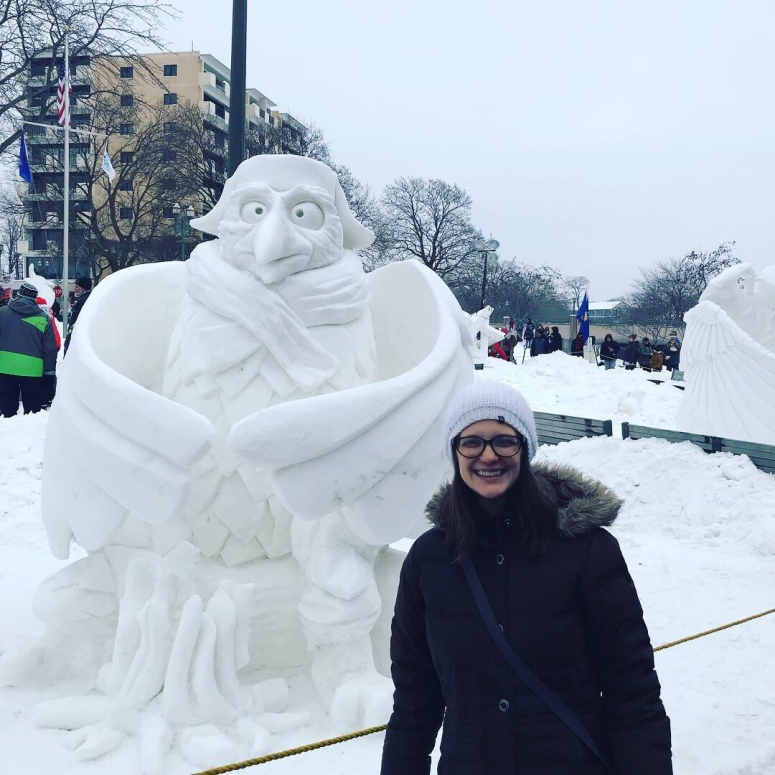 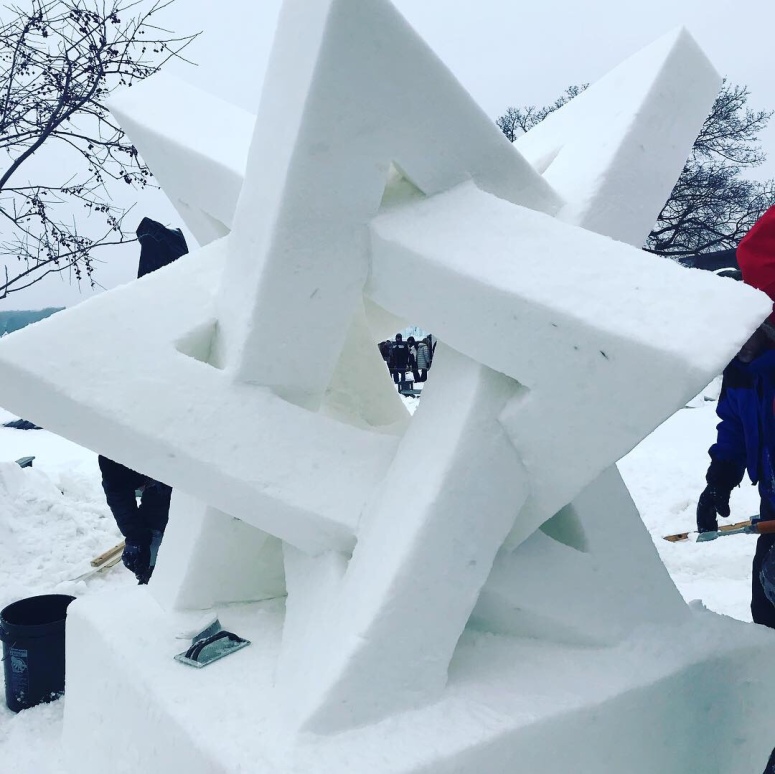 There were a several things I loved about the competition. First, we were staying close enough that it was easy to walk through multiple times and see the artists’ process and progress. My favorite time to walk through was during the last 30 minutes of the competition, as the sculptors were completing some finishing touches (or in a couple cases, hurrying to finish). You can then vote for the “people’s choice” and watch the award ceremony if you’re so inclined. 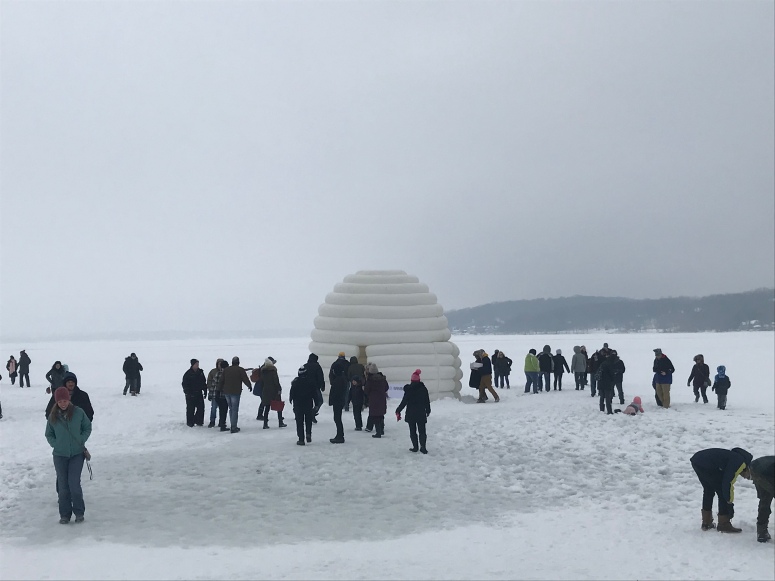 Is watching a Snow Sculpting Competition not your thing? The same area also features a warming hut with concessions, indoor music and festivities in the Riviera (a city building situated on the lake), and the new ice castles. Though we skipped the ice castles this time around, my husband and I visited the ones in Stillwater, Minnesota last year, which were created by the same company. Here’s what they’re like: 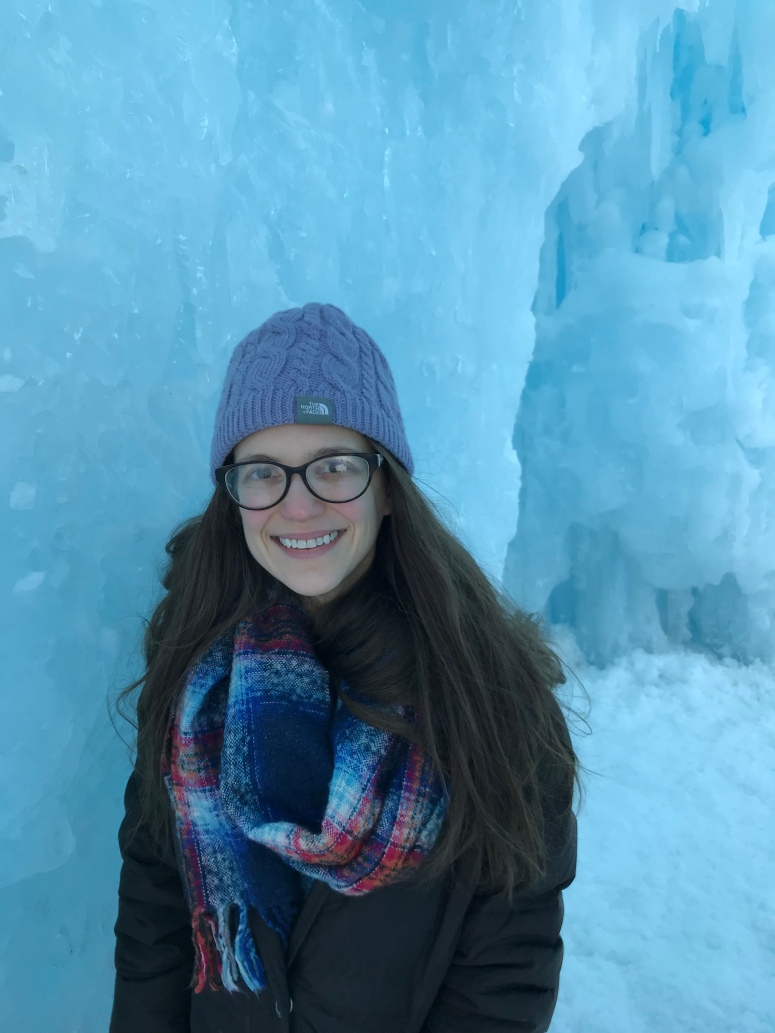 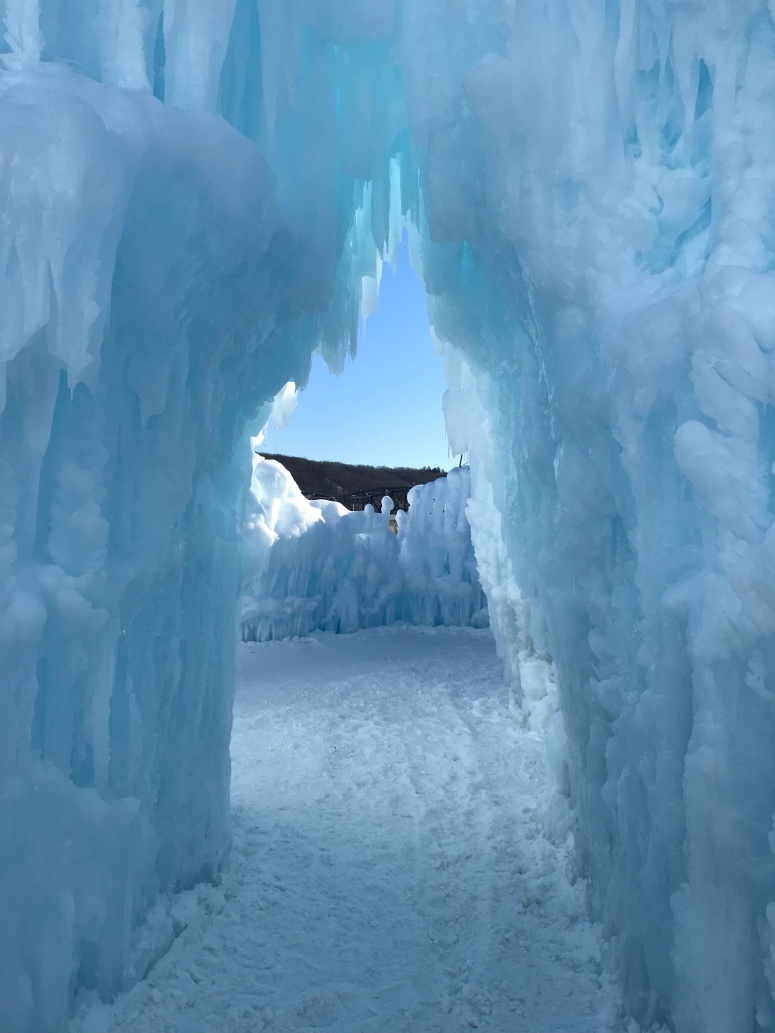 I wasn’t sure what to expect from the Cocoa Crawl, but there’s something about the combination of checking out downtown businesses and free food that I can’t resist. The Cocoa Crawl exceeded expectations. We started at The Bottle Shop, a local wine store, to get a map to the 30-some locations that were offering hot chocolate or other treats. If you stopped by a certain number of those locations and had them sign your map, you got a “cocoa crawl” travel coffee cup at the end. Especially for those with kids, this event is a must – just be prepared for a sugar rush to ensue afterwards!

We were looking for a fun way to cap off the evening and decided that fireworks would do the trick. We ended up being disappointed since the flares from the parade caused quite a fog and made the fireworks impossible to see. With that said, the Mountain Top did look like a great family-friendly place to do some skiing or snowboarding. If you’re already there, it’s worth staying for the torchlight parade to see what it’s all about, and maybe in future years the fireworks will be visible!

One of my bucket list items is to ride in a helicopter, so I was pretty excited to see that at Winterfest, MF Helicopters offers aerial tours of Lake Geneva for only $40/person. Unfortunately, the tours were “weather permitting” and weather was not on our side that weekend. This is the biggest reason I want to go back!

The Baker House is a historic mansion located across the street from the lake, offering gorgeous views for those staying at their Bed & Breakfast, as well as for those just going for a drink at the lounge. In true speakeasy style, the lounge requires a password, which is only given to guests. Fortunately you can bypass the password if you’re willing to do something silly, like dance in front of the camera, with the visual being played at the bar. Once you enter, you can go into the tiny speakeasy for a drink (they were nice enough to make this pregnant lady a mocktail) and explore the first floor of the Baker House. We had a great time exploring the Victorian-era rooms, watching the sunset from the indoor patio, and ghost hunting even though we didn’t actually see any ghosts. There are also vintage hats available to help guests look the part, if you’re willing to get past the idea of sharing headwear. 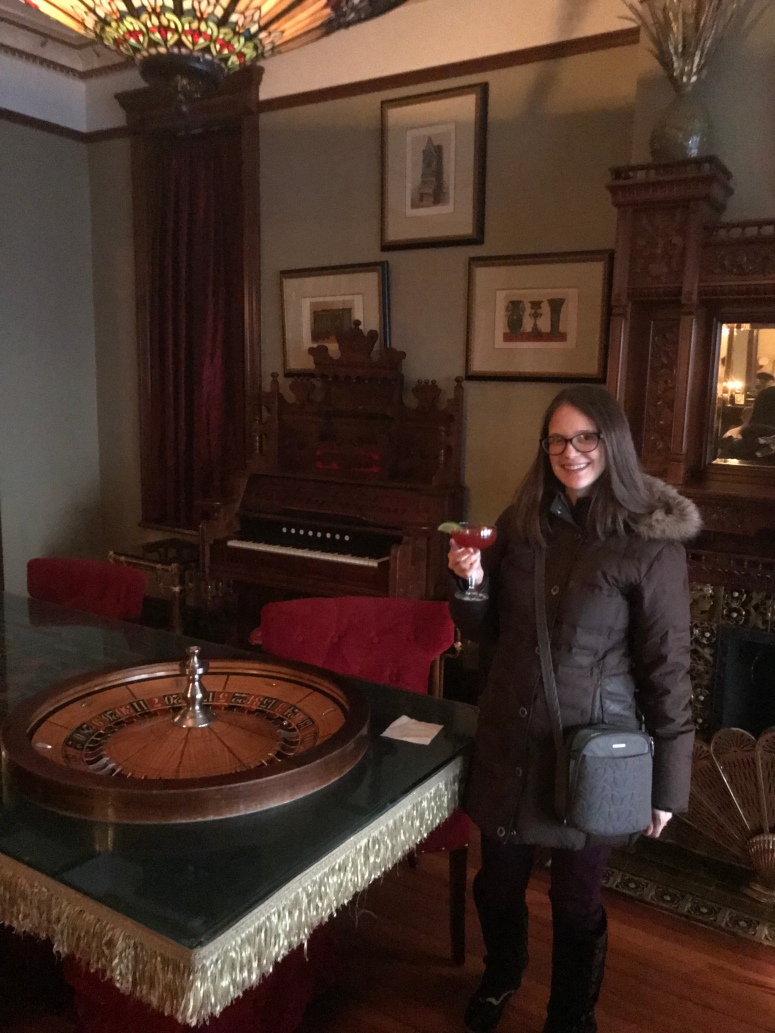 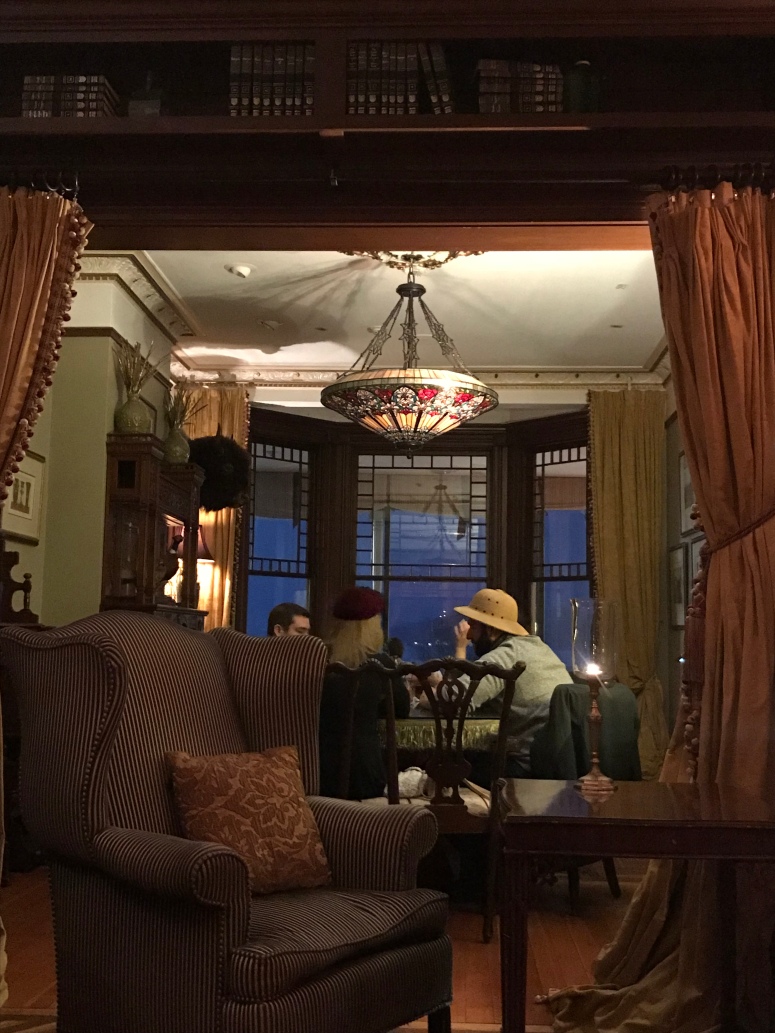 In order to fuel up for a day of Winterfest activities, it’s imperative to have a stick-to-your-ribs breakfast. This farm to table brunch spot on Broad Street was perfect for this purpose. My husband had the french toast and I had the tofu hash, which normally also comes with eggs but they had no problem veganizing it for me. The ambiance is great so you may want to give yourself time to linger over your Colectivo Coffee after the meal.

Great for herbivores and omnivores alike, this was my favorite restaurant in Lake Geneva. I had the vegan chili and the tamale plate, both of which were excellent. They also have a huge menu featuring all kinds of sandwiches, foods from around the world, and coffee drinks. If you’re vegetarian or vegan and are visiting Lake Geneva, this is the place to go.

Kilwins was one of the places we discovered during the Cocoa Crawl that we decided was worth a second visit. It’s the classic, old school ice cream and candy shop that little kids dream about. The lemon sorbet checked my sweet tooth box. Here’s the evidence:

I will definitely be back to Lake Geneva, with my remaining to-do list there including the aforementioned helicopter tour, exploring Bigfoot State Park, and a canopy tour featuring aerial bridges and zip lines set in the forest. What’s on your to-do list in Lake Geneva? What should I make sure to see next time? Post your thoughts in the comments section below!