Budapest might be one of my favorite cities I’ve visited, with its stunning architecture, relaxing thermal baths, and international flair. I also love the two personalities of “Buda” (the more sophisticated area on the west of the Danube River) and “Pest” (the more gritty and eclectic area on the east of the Danube). Since I have a warm place in my heart for both, I went wherever my mood took me. Are you headed to Budapest but only have 2-3 days? Follow this guide to make sure you hit all the highlights!

Since St. Stephen’s Basilica was located just a stone’s throw from my hostel, this was one of the first places I came across in Budapest. As one of the largest buildings in the city, it’s hard to miss. This Roman Catholic church features an impressive dome and 360 degree views of Budapest if you take the stairs or elevator up. 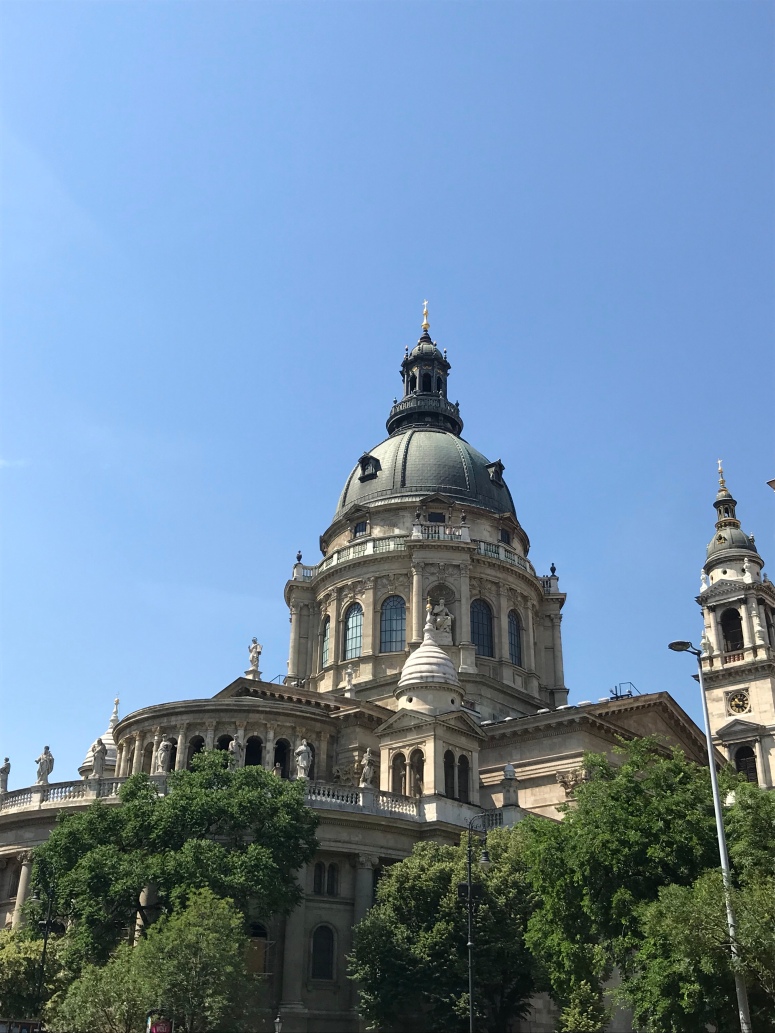 The Dohany Street Synagogue was not on my itinerary, but an absolute gem that I stumbled upon. It’s one of the largest Jewish synagogues outside of Israel and in addition to being expansive, it’s ornately decorated with the Star of David featured in every nook and cranny. Upon entering you’ll see signs with various languages, indicating where you can start your formal tour. I do recommend taking a tour, since it provides a brief (20 minute) history of the synagogue, the adjacent Holocaust Memorial Gardens, a large piece of art titled the “Tree of Life,” and a Jewish cemetery. Following the tour, you may even have the opportunity to view a short, traditional concert.

Do be prepared to go through security before going inside, including possibly removing any money belt or similar items you may have under your clothing. Additionally, conservative attire is best. I was allowed in without a paper covering but I was asked to pull my skirt down a bit upon entering. Shoulders or other exposed skin will require paper covering. Bringing a scarf to place over your shoulders is a great alternative. Men can bring a hat to cover their head or can purchase an inexpensive paper kippah or yarmulke.

The New York Cafe, known as “the most beautiful coffee shop in the world,” does not disappoint. Think marble staircases, chandeliers, and frescos. Plenty of people were wearing casual attire, but I’d err on the side of something a little nicer. If you’re on a budget, stick to an espresso and maybe cake, as their meals are pricey.

A visit to at least one thermal bath should be a requirement for any trip to Budapest, especially if you’ve never been before. With the moniker of “Spa City,” the baths are from local natural hot springs. There are a number to choose from, with the most popular being the Gellert Baths and the Szechenyi Baths. Consider Gellert the beautiful and relatively low-key of the two, and Szechenyi the fun and sometimes rowdy one. Fittingly, Gellert is located in the more sophisticated Buda, while Szechenyi is in the more hipster Pest.

The Gellert Baths feature gorgeous indoor architecture, as well as a few outdoor pools and lounge areas. If you choose to use the large indoor pool (which most use for laps), the custom is to wear a swim cap. Swim caps are not required for the other pools. The Gellert Baths are typically not as crowded as Szechenyi and allow for a relaxing day of alternating between pools. Spa treatments are much more affordable than they can be elsewhere, such as in the U.S.

At the Szechenyi Baths, enjoy a huge outdoor pool and lounge area, with features like a circular whirlpool, jets and fountains, and a chess board where some of the locals hang out. Szechenyi is particularly great for larger groups. Another perk is that Szechenyi is located within Budapest Park, so you can combine your excursion with some additional sight-seeing. In particular, make sure not to miss Vajdahunyad Castle, where Bram Stoker envisioned his character Dracula living. Tours are available that allow you to go up into the lookout towers for a small fee.

An option for both baths is to purchase a “cabin,” which is a small private changing area where you can also store your belongings. For the equivalent of a few dollars more, I appreciated being able to change in private and not have to fuss with an actual locker. Make sure to bring a towel, flip flops, and of course your swimsuit. Rentals are available if you forget anything.

Check out Central Market Hall for a glimpse into the culture of Hungary and what it might be like to live there. Walk down the aisles of stalls featuring produce, local delicacies, wine, and of course – the paprika Hungary is known for. The second floor boasts food counters to grab lunch and more vendors with local goods. Do be mindful of your belongings on the second floor; the area can become very crowded and an easy target for pickpockets.

The Parliament Building & Shoes on the Danube

I’m pairing these because they’re within close proximity and it’s therefore easy to see both in a short amount of time. The parliament is the largest building in Budapest and it’s actually very difficult to get the whole thing in one photo unless you’re across the Danube from it. I recommend checking out all angles to fully take in its gothic style.

Shoes on the Danube is a nearby memorial that honors those who were killed on the banks of the Danube during WWII. These people (about 1/4 of them Jewish) were ordered to take off their shoes before being shot into the river. Sculptures of shoes were placed along the river to form an intense but meaningful spot in Budapest.

Buda Castle rests opposite the Parliament, also situated on the Danube River. Inside is the Budapest History Museum and the Hungarian National Gallery, but the best part is just galavanting around the grounds. This is also one of the best places to take photos of the Parliament building in its entirety. If you want to go all out, you can also ride a funicular up to the castle and hop on a river boat when you’re done exploring.

Fisherman’s Bastion is a quintessential spot in Budapest. Completed in 1902, it was one of the projects that commemorated the 1,000th birthday of Hungary and was intended as an addition to Buda Castle. It’s essentially a beautiful terrace that features seven towers and endless panoramic views. I spent my time there eating sorbeto, walking up into the towers, taking photos, and listening to some nearby music. You can’t go wrong with a visit here.

Have you been to any of these spots in Budapest? Post your thoughts in the comments below! Or, if you like this blog post, do me a favor and pin one of my images: 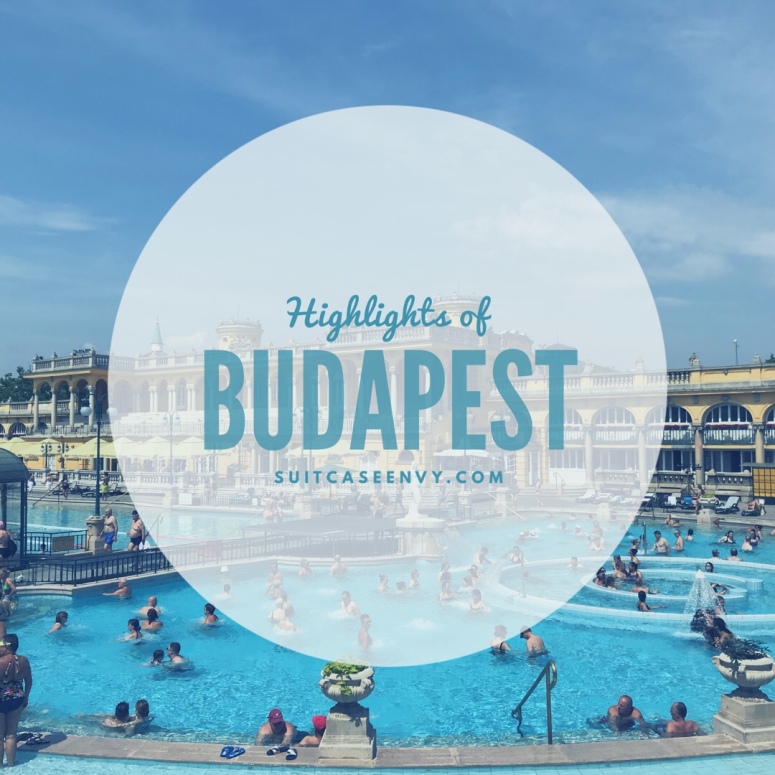 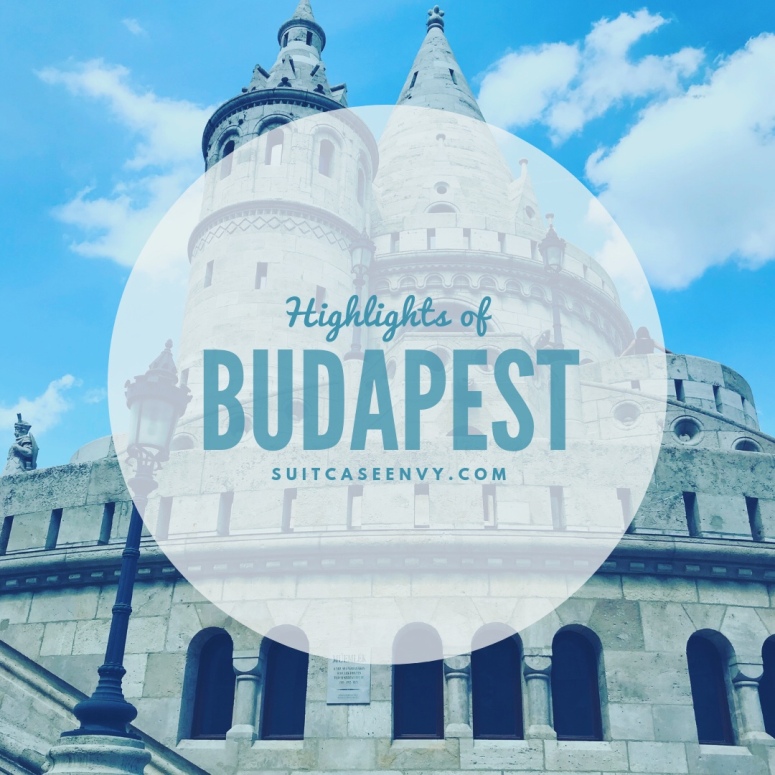 One thought on “The Highlights of Budapest”