One of my objectives on my most recent trip through Europe was to visit some WWII and Holocaust sites. I researched going to Auschwitz, but Poland was a far train ride from my other destinations and I decided that might be better for a future trip. Dachau, however, is only about 30 minutes from Munich, which I was already flying in and out of. Dachau was the first concentration camp in Germany and the location of an estimated 40,000 deaths before its liberation in 1945 by the U.S. army. While I recognize that this is not the most cheery thing to do on a vacation, I felt that it was important to see and it ended up being one of the most meaningful experiences I’ve had on my travels.

I debated on whether to go by myself or as part of a tour, but ended up booking a half day trip through Radius Tours. They have a convenient meet-up point in Munich’s central train station, take you on the train as a group, and tell you about some of Dachau’s history on the way. The price of 28 euros includes the round trip train travel and admission into Dachau’s memorial site.

In preparation for my trip, I read Viktor Frankl’s Man’s Search for Meaning. Even though this book chronicles Frankl’s time at Auschwitz, many of the stories I heard at Dachau were quite similar. It helped give me additional background that was helpful before my visit, and primed me to empathize with the depth of the individual experiences of the victims and survivors. Perhaps because Dachau looked so similar to the images I had in my mind while reading Man’s Search for Meaning, I felt a wave of emotions right when I entered that I wasn’t expecting to be so immediate. I recommend allowing yourself extra time and making sure not to pack your day with other activities, since the heaviness of the five hour trip could leave you feeling tired or emotionally depleted.

My guide from Radius Tours was very impressive in his knowledge base and talked about the atrocities at Dachau with thoughtfulness and deep respect. I felt like I learned interesting kernels of information that I would not have gotten had I toured the memorial site on my own. There was also a nice balance of learning from the tour guide and meandering the spaces and reflecting on our own.

One of the first stops at Dachau is the “Arbeit Macht Frei,” or “Work Will Set You Free,” gate. This propaganda was placed not just at the entrance of Dachau but also at many other concentration camps, including Auschwitz. The original gate was previously stolen and now resides behind glass inside one of the buildings on-site. A replacement gate remains outside at the entrance of Dachau.

Upon entering the gate, you can find a visitor center with historical information, memorials, and the former prisoners’ camp, all surrounded by walls and guard towers. The site also includes the bunkers used for torture, the crematorium, and the gas chamber, which are of course particularly heavy and difficult to see. 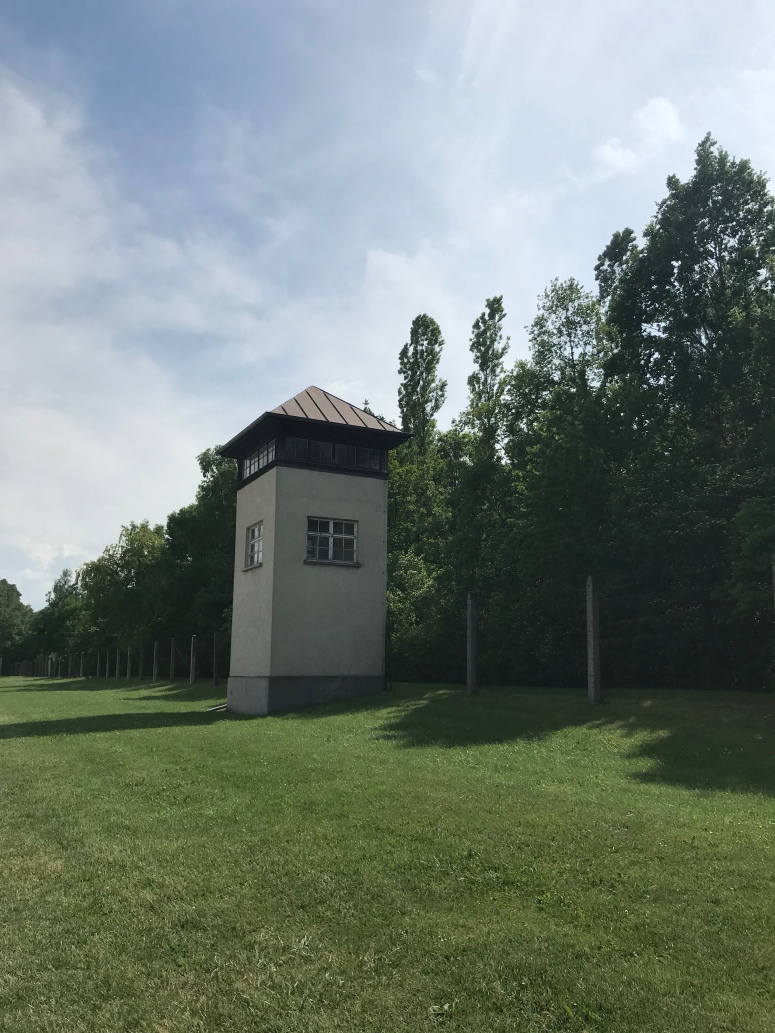 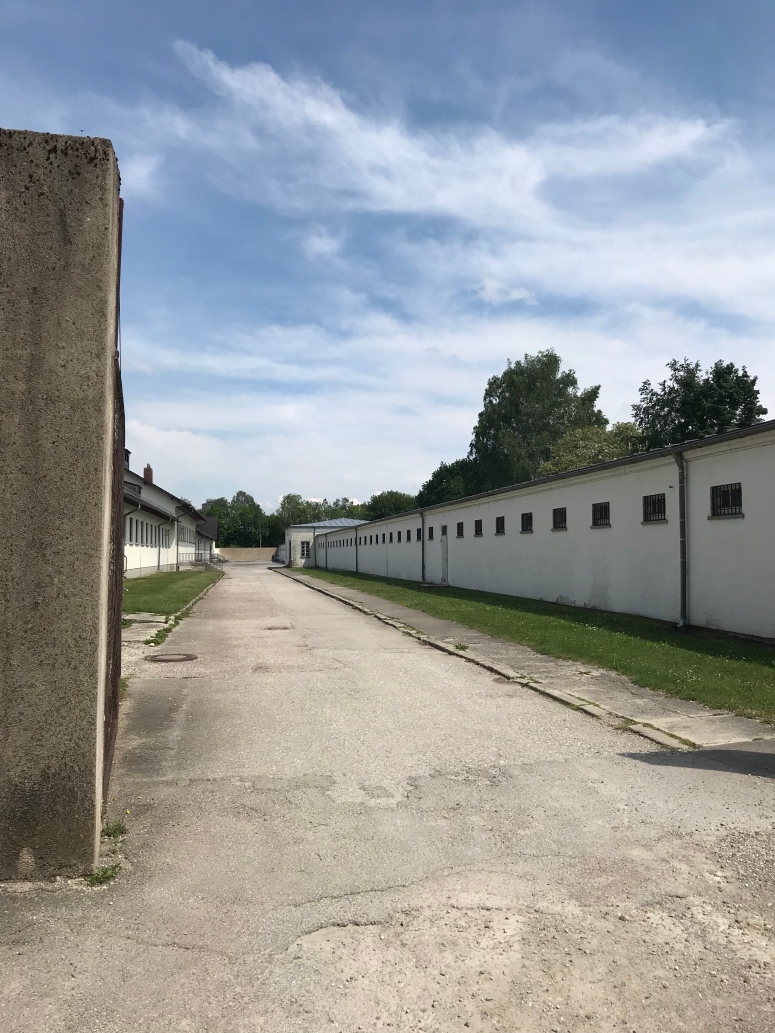 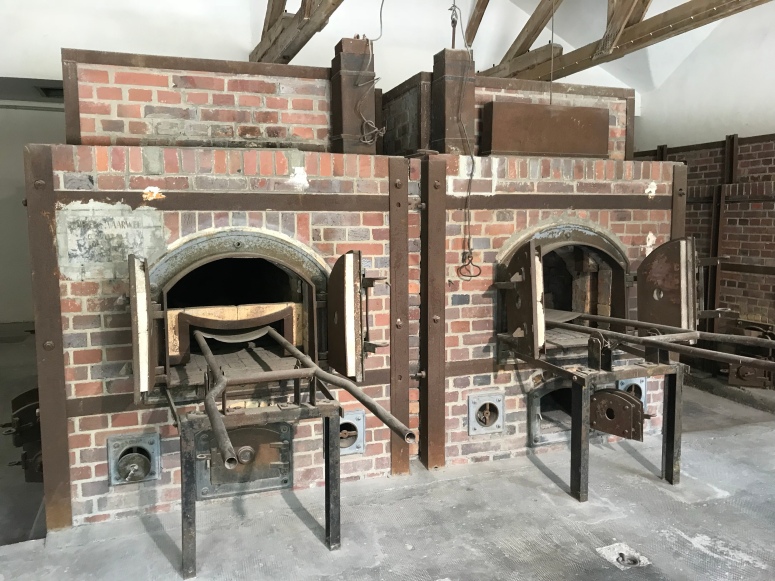 Perhaps the most visible memorial is a large sculpture by Nandor Glid, who lost his father in Auschwitz. This sculpture honors the many prisoners who died by suicide after jumping onto the barbed wire fencing. Nearby is an open stretch of land where there was a “roll call” of thousands of prisoners twice every day.

You can see where incoming prisoners were taken to disrobe and give up all of their possessions, including any wedding rings or photos of their families. They would receive a uniform with a symbol on the sleeve, identifying them only by a number and a triangle indicating their reason for imprisonment (e.g., Jewish, LGBTQ+, Jehovah’s Witness, objector, Sinti or Roma “gypsy.”) A monument incorporating these symbols was erected in 1968, though the pink triangles that stood for being LGBTQ+ were not included, displaying how far we needed to come at the time (and still do). 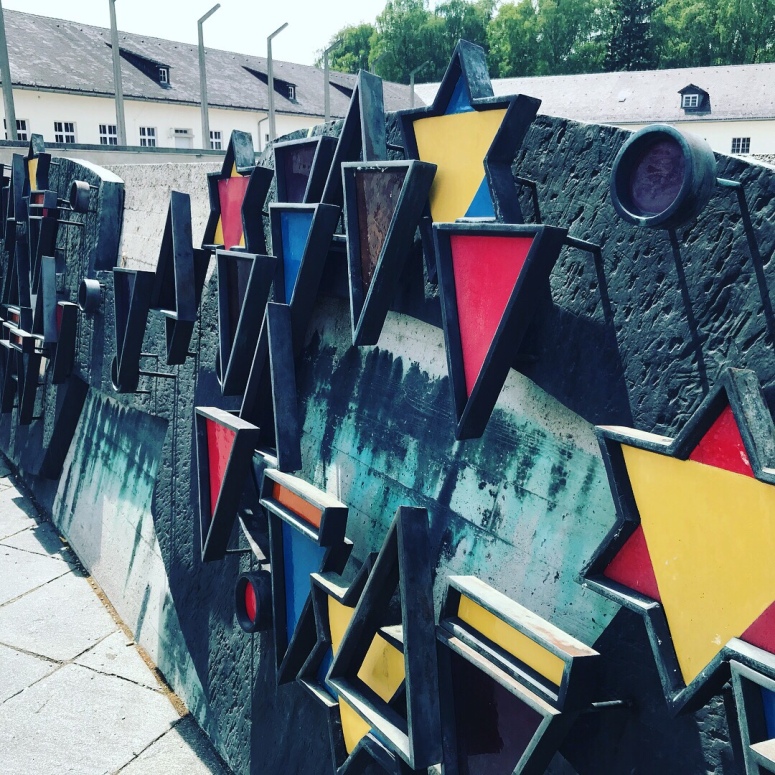 Another element that struck me was the propaganda shown to Germans outside of Dachau at the time. Photos made it appear that Dachau was more of a summer camp where men sat by the campfire and played cards than reflective of the torture that actually took place there. People in the ads looked well fed and well kept, which couldn’t have been farther from the truth. This, and many other things I encountered at Dachau, made me think about how the Holocaust happened not just because of fear and hatred, but also due to groupthink, indifference, and lack of questioning the information we’re presented with.

Though I won’t go into too much detail about some of the worst atrocities, one moment that I don’t think I’ll ever forget was seeing the gas chamber. It was disguised to look like shower stalls, tricking prisoners into going inside without a fight. Being there in person led me to feel both sad and horrified.

Most survivors and their families say that visiting Holocaust sites is so critical to make sure that we learn from this history and prevent it from ever happening again. Though I certainly felt a deep sadness during my tour, I also had an unexpected feeling of awe – awe of the strength of the prisoners who lived and died there. It makes me think of this Nietzsche quote, which Viktor Frankl cited in Man’s Search for Meaning: “He who has a why to live can bear almost any how.”

I highly recommend touring Dachau as a day trip from Munich, as well as going through Radius Tours. I actually went on another tour through the same company later in my trip, and consistently found the tour guides to be friendly and highly knowledgeable. You can also pet Albus, the Radius Tours pup, while you wait for your tour to begin. Find out more about their tours here: https://www.radiustours.com/en/english-tours.html

Want to save this post? Pin the image below: