It’s surprisingly easy to spend a day at Golden Gate Park and its nearby attractions without spending a dime (well, except gas, tolls, and food- it is the expensive San Francisco Bay Area after all). A handful of activities in the park cost money. Though I’m sure those are great, this post is focused on what you can do for free. Given that Golden Gate Park is even larger than Central Park in New York City, there’s plenty to see.

Before we get started, find a printable map here.

On Saturdays, there’s a free shuttle making various stops around the park. The shuttle site recommends parking for free at Ocean Beach, located on the western edge of the park, then relying on the shuttle. The stops are clearly marked with signs stating that the wait time is “about” 15 minutes. After reading reviews about the wait time being longer than expected (or the shuttle never showing up), I was skeptical. I became a bit more optimistic after seeing the shuttle go by just after entering the park, but alas, when I waited at a designated stop it never showed. In short, if you’re driving already, I recommend just driving into Golden Gate Park. Surprisingly, there is ample parking inside, allowing visitors to drive between points of interest within the park.

You can start your day at Ocean Beach, watching the boats go by. Definitely bring a sweatshirt; this is not the warm California beach that out of towners might think of. Though the water is cold and there are strong rip currents that make the water dangerous for swimming, it’s a popular spot for surfers who know what they’re doing. The Sutro Baths, the remnants of a historic bathhouse, are located on the north end of Ocean Beach.

Once you’re done at Ocean Beach, make your way to “The Giants,” two large windmills from the early 1900’s. The Dutch Windmill is my favorite of the two, mostly because it’s paired with the Queen Wilhelmina Tulip Gardens. Just look at these vivid colors: 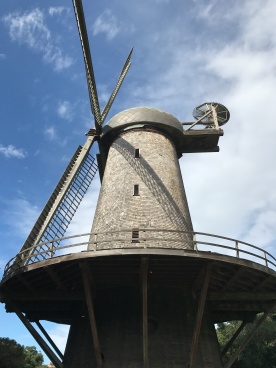 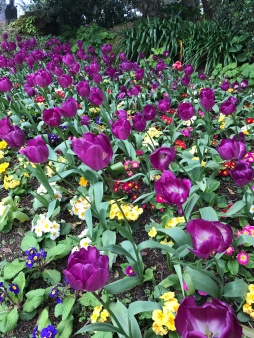 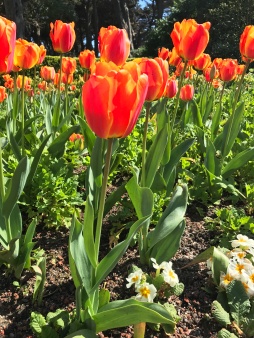 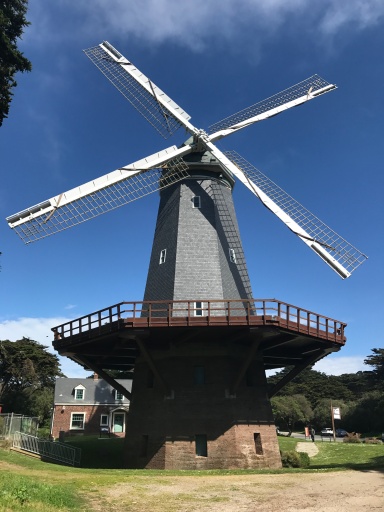 If you go to the Murphy Windmill as well, you can learn a bit more about the giants from a couple placards.

Next you can make your way to the Bison Paddock and Spreckles Lake. Both are mellow locales; you can walk around the paddock to hopefully get views of several bison, then perhaps have a picnic lunch on one of the many park benches at Spreckles Lake. If you’re lucky, you may also get to see a chipper elderly gentleman showing off his electric toy boat.

You can then make a brief stop at Lloyd Lake, a small but pretty lake to walk around, then move on to Stow Lake and Strawberry Hill. These are focal points of the park and are definitely worth visiting. Though I passed on spending $28 on a paddle boat rental at Stow Lake, I thoroughly enjoyed walking around the lake and taking a cute little bridge into Strawberry Hill. Within Strawberry Hill you’ll find Huntington Falls, an artificial but convincing 110-foot waterfall that you can climb to the top of, a serene Chinese pagoda, and the Sweeney Observatory that boasts stunning views of the Golden Gate Bridge and a huge pink church.

If you’re still up for exploring, head farther east for even more attractions. Make a brief stop to the Shakespeare Garden, the most popular wedding spot in the park, then walk to the AIDS Memorial Grove. The AIDS Memorial Grove is a quiet, moving experience; take your time meandering the wooden paths, reflecting, and looking at the names of those in the “Circle of Friends.” My sister spotted Harvey Milk’s name here: 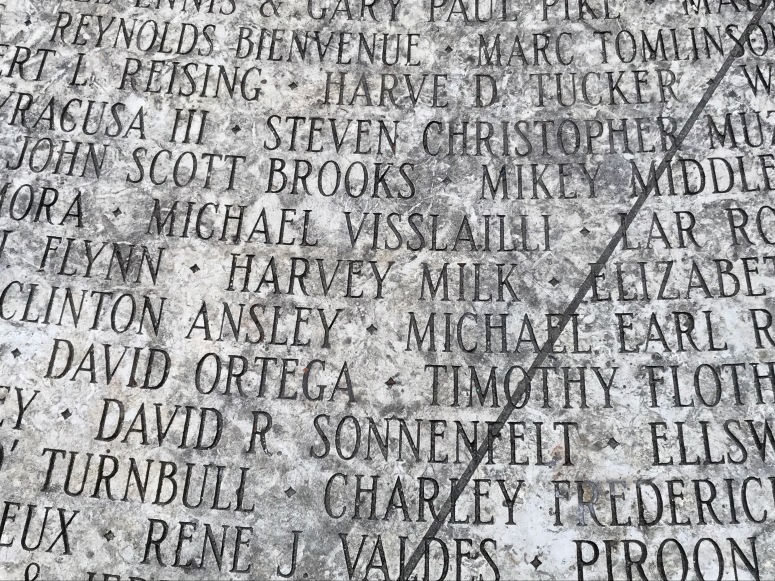 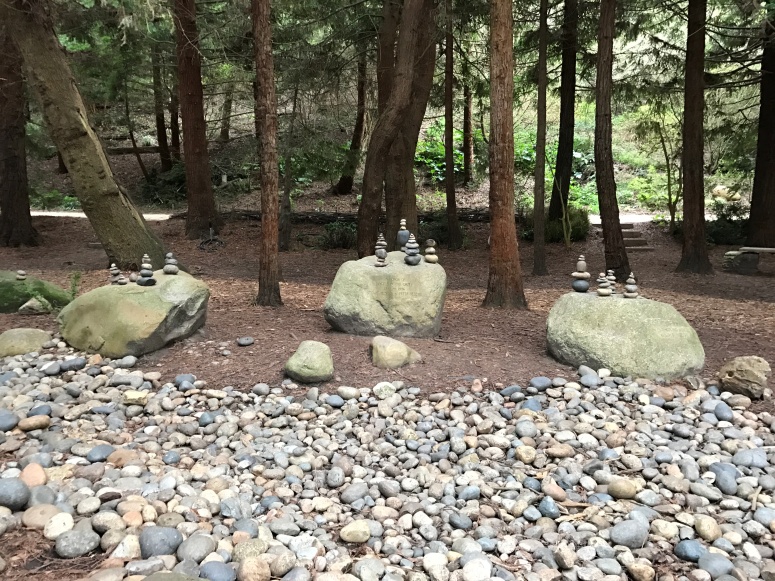 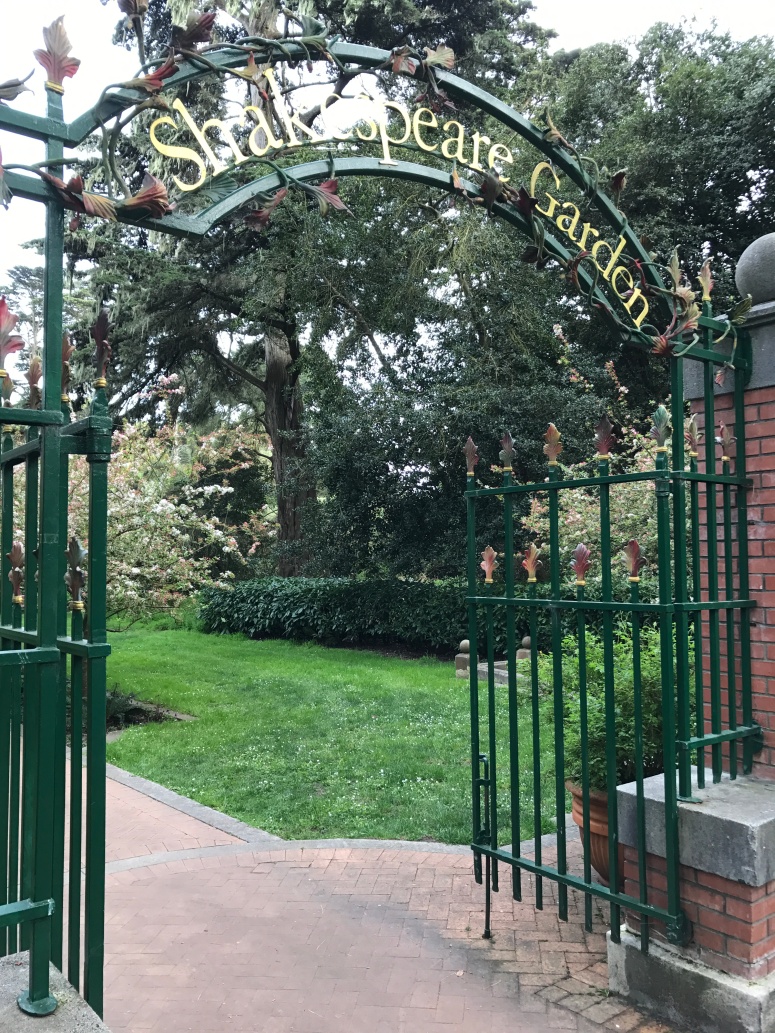 Ideally, take this trip when the flowers are in bloom. I went in March and got to see a ton of cherry blossoms and lilies. I read that April is an even better time to visit.

For those with money burning a hole in their pocket, the following are some additional sites that can be explored for a fee:

Conservatory of Flowers, $8 for adults*

California Academy of Sciences (natural history museum), $35 for adults, or $15 per adult for the 21 & over “Night Life” series from 6-10pm on Thursdays

San Francisco Botanical Garden, $8 for adults*, or free early mornings and the second Tuesday of every month

*cheaper for San Francisco residents
To really make the most out of a day trip to this area, head farther east into Haight Ashbury. Of course, this neighborhood used to be ripe with counterculture. Though some of this has faded (i.e., Ben & Jerry’s is now at the intersection of Haight & Ashbury), there are still a number of unique places. I recently went to Vegan Burg, an aptly named all-vegan burger joint. I had the tangy tartar burger and fries with seaweed seasoning. As expected, it was incredible. 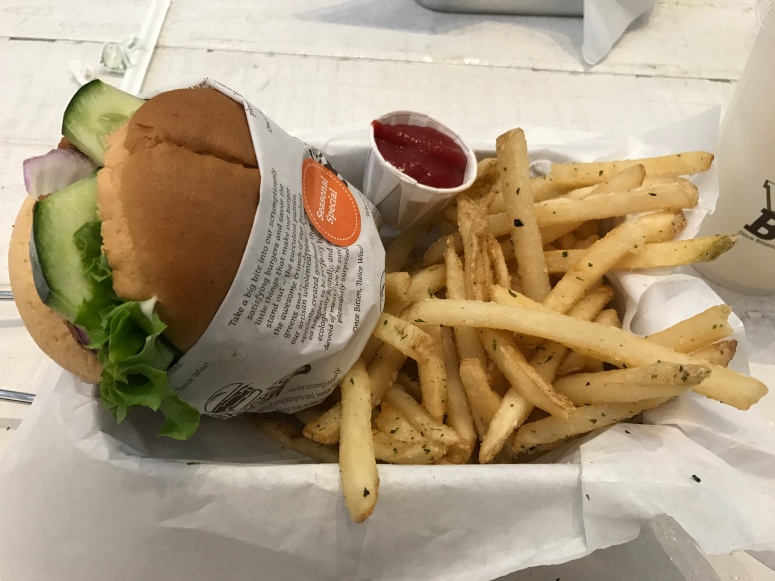 Is there a hidden gem of Golden Gate Park that I missed? Tell me about it below!

Want to save this post for later? Pin this image: 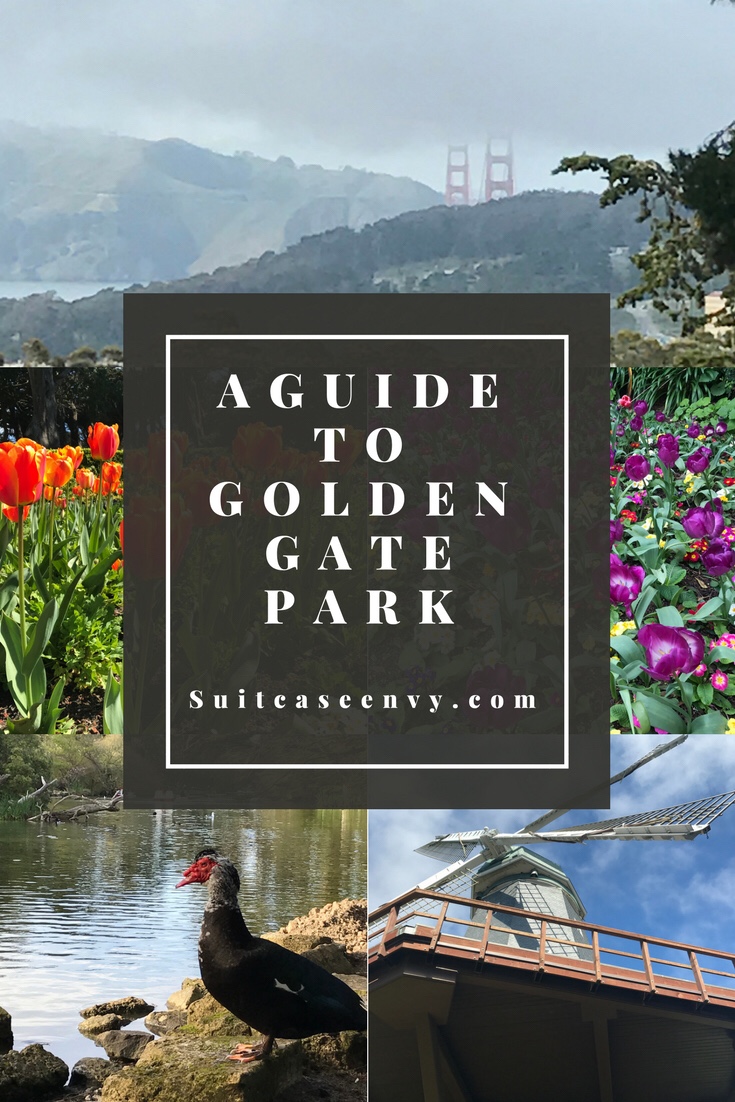 One thought on “A Cheapskate’s Guide to Golden Gate Park”